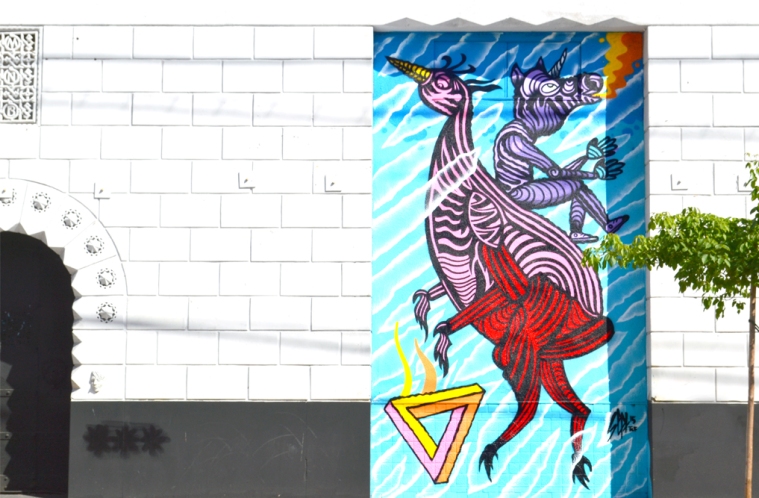 New mural by Septerhed at the Art District in Downtown LA.

Septerhed will be having a show tonight, October 10th. Make sure to spot by and check out a collection of his new work. Read the flyer and press release below for more information.

A rare collection of intimate hallucinations, brought to you by Septerhed. This is a unique opportunity to view part of this artists life. It has been sacrificed to the world in the form of illustrations and paintings to be sold.

Septerhed was born in Japan and can say “Good morning” in Japanese. A graduate of Otis College of Art and Design with a BFA in Advertising, Septerhed has completely abandoned all plans made during his 4 years at art school. Taking bits and pieces from here and there to promote subversively on the streets of LA, his “Anti-Graphical” approach is hard to ignore. Septerhed’s style is based as of late on what he calls “A pinched nerve of the soul”. All of his new work, in lines and waves with brief studies in hand drawn typography is created with the goal of helping people feel a little less alone in the world. A die hard screenprinter, painter, illustrator and a full time Muralist attacking over 390 walls with spray paint in under a 4 year time frame. He has shown work at Bergamont Station, Lab Art, The Gabba Gallery and many other Los Angeles based locations. Septerhed has yet to reach limitations in his work or his medium, as he attempts to paint as much of the world as he can in his lifetime. Past commissions and projects have led him to the East coast to paint a 2 story building in Buffalo NY and back to the west coast to work on a YouTube 2 day live broadcast sponsored by Hewlett Packard for Clams Casino, as well as projects with Mobli, Electronic Arts, Red Bull, Converse, Vision Street Wear, Umami, and Murals commissioned by the Downtown Arts District and LA Freewalls. For the past three years he has been commissioned work by Starbucks on a monthly basis. He has been featured on the Juxtapoz site as well in local news and the Los Angeles Times newspaper. Septerhed has become part of an installation in Belgium, where his work was burned into the wood used to build a bridge,which will be on display for the Tomorrowland Festival and the next 20 years.
Recent commissions have led to a prominent billboard by the Aids Healthcare Foundation on Santa Monica blvd and art featured throughout the videos “The Coolest” by Jaden Smith and “F Q-C #7” by Willow Smith.