Cecilia is a passionate, self-taught artist from Los Angeles California who has been exploring drawing and painting since she can remember. Cecilia specializes in portrait art with the intent to capture the life and true, raw emotion that resides inside people. The spirit of life is what ignites the creative flame that sparks inspiration for her dramatic, colorful portraits.

She loves to capture the uniqueness that’s within all living things and really brings that spark to life by using colors to embrace the energy of what the feeling is. When combining her own style of portraiture with mural art, she embraces it by using the huge necessary scale to cover a wall. 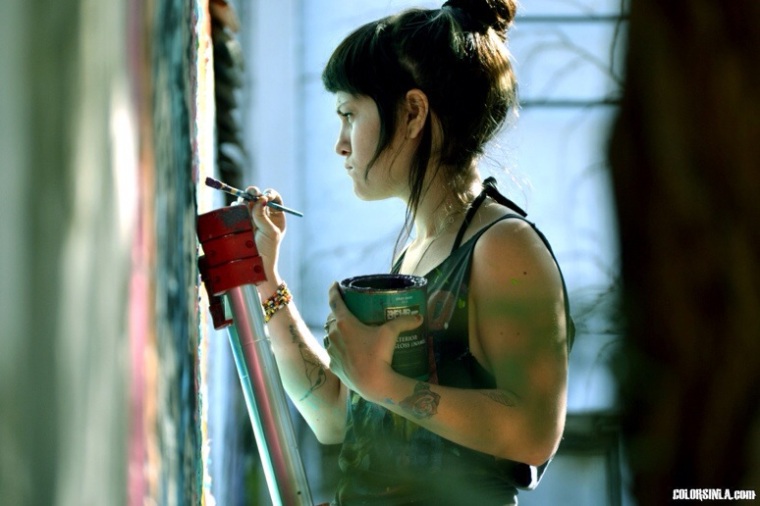 Her murals beautifully capture the detail of how she uses abstraction with color while still capturing the complexity of realistic emotion. More of Cecilia’s work of her murals around Los Angeles can be seen on her Facebook page.
https://www.facebook.com/Ceciliapaints

Gianni Arone is a self taught multi-disciplinary artist based in Los Angeles.

An online marketing veteran of 10 years, Arone left his previous line of work to better afford himself the time to create original works of art. Gianni embraces a wide range of mediums, yet his work remains completely distinct, demonstrating his ability to intuitively create in a multitude of forms. These include large-scale graffuturism murals, densely layered mixed media works, emotionally charged sculptural assemblages, and poignant and whimsical works on paper. Elements of music, text and film also work their way into Gianni’s creative constructs.

His small scale pen and ink illustrations have opened a new door—a wondrous evolution from his large scale murals and artwork. These intimate whimsical creations are filled with his unique and signature style; using ink comprised of fine lines and stippling; an art form arising from 18th century dutch art masters. An adaptive creative process is fundamental to Gianni’s artistic practice. Works often begin with a singular image, texture, feeling or text and take shape naturally by way of channeling the hand/eye/mind that contains a sacred knowledge and un/ common sense.

Favoring found materials, steeped in history and meaning allow for chance encounters, shifts of direction, and veiled messages to permeate his creations.

Gianni’s recent participation with Red Bull Curates 2014 initiative received acclaim as People’s Choice selection with his artwork “I NEVER RAN IN MY DREAMS, I FLEW—an amalgamation between Arone’s spoken word, illustration and painting.