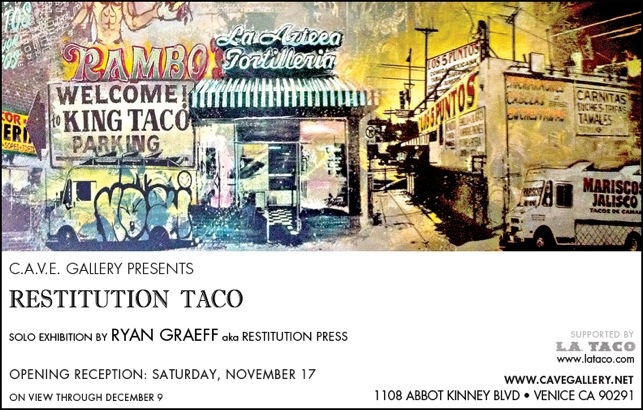 Venice, CA – C.A.V.E. Gallery is pleased to present Restitution Taco, an exhibition showcasing new works by Restitution Press, AKA Ryan Graeff, whose iconic imagery has appeared in the streets of Los Angeles for the better part of the last decade. This solo show will feature a new collection of work that celebrates the city’s vibrant “taco lifestyle”. Borrowing from, and riffing on the signage and cultural iconography of Los Angeles’ legendary taquerias, trucks, and Mexican restaurants, Restitution Press has created a parallel world where tacos inspire a brilliantly chromatic urban landscape. The images are recognizably Los Angeles, presented through the eyes of Restitution Press, with his trademark screenprint and paint process that creates both multilayered abstraction and crisp, hand-painted lettering and detail. Photographs used in the creation of the work were culled from the extensive image library captured over the years by L.A. TACO, a website and artists collective whose mission is to “celebrate the taco lifestyle in Los Angeles, California”.

A special limited-edition ‘zine will also accompany the exhibition.

After the party, it’s the after party… organized with Hit+Run, there will be music from Boss Harmony and a very special secret guest DJ. It all goes down at the Del Monte Speakeasy starting at 9pm and going late. 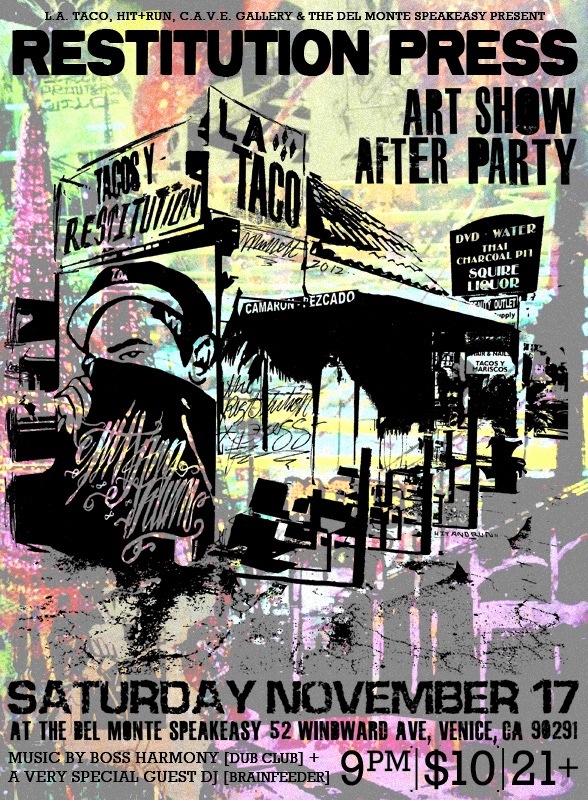